All code snippets in this post assume the SharePoint context object has already been initialized. For completeness sake, here's the code to setup the context:

Starting from the top of the security hierarchy, the Site permissions menu item under Site settings shows the site collection's SharePoint security groups, including their permission levels.

To list the same set of security groups using the object model, the following code is required:

This implies that creating a new web and breaking role inheritance (through the browser interface), even though SharePoint creates additional members, owners, and visitors groups and associates those with the new web, the security groups themselves are created at the site collection level and hence are visible and usable from any web within the site collection.

What's displayed in the browser under Site Settings and Site Permissions are the security groups with their associated (or bound) role definitions. What the user interface calls permission levels, the object model calls role definition bindings.

Given a securable object such as a web, we can iterate its role assignments and role definition bindings using the code below:

These are the standard role definitions created by SharePoint during site collection creation. Like with security groups, we can create our own role definition and associate those with groups. For instance, we may deviate from the out of the box behavior and create a role definition for when contributors should only be allowed to add items to lists and not delete. Or when visitors should be able to create and save personal views on lists, which they aren't by default.

In any event, never modify an out of the box role definition. Instead, create a new one and reset the binding where applicable. This'll make long-term maintenance and upgrading easier.

Role definitions and base permissions

Clicking a permission level displays a list of permissions, each of which can be turned on or off. The screenshot only includes the first couple of permissions: 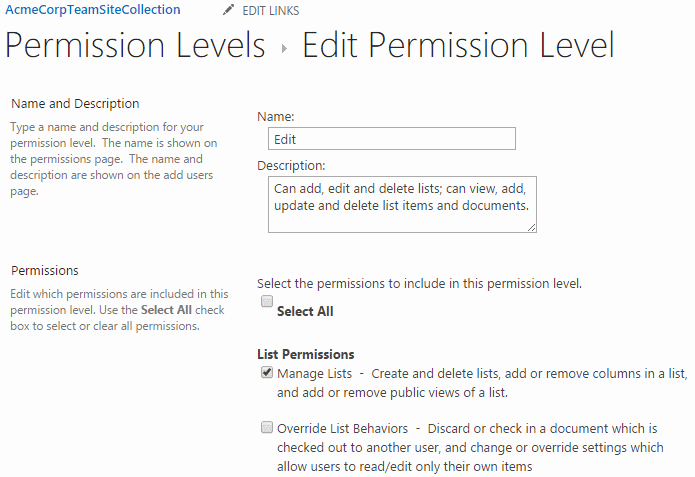 The owners, visitors, and members groups -- or more specifically the role assignments related to each group -- are intrinsic to the web object. It has distinct properties for associating an owner, visitor, and member group with a web object. This seems odd, compared to simply adding role assignments to the web object and having their role definitions and base permissions define what a user can do. For some reason, the SharePoint team decided to add an extra discriminator to the security equation so that inside a web, we can assert the user has a specific permission and has as a special group association.

Any security group may be designated the web's owner, visitor, or member group by assigning it to the corresponding property on the web. It just so happened that during site collection creation, SharePoint created groups with names of owners, visitors, and members prefixed by site collection title and setup the associations on our behalf.

Now, let's redefine the default visitors group associated with the root web. First we locate the associated security group (it can be any custom created security groups previously assigned). Then we load the group's role assignments and modify its bindings to include Full Control.

With the above change, every SharePoint user and Active Directory group added to the visitors security group operate have Full control permissions within the site collection.

In order to keep track of the concepts and their relationships, think of the SharePoint security model in terms of the following layering:

When SharePoint has to determine if a user is authorized to perform a certain action, such as editing a list item, SharePoint computes the user's effective set of base permissions for the securable object in question (in this case a list item). The computation involves taking into account all role assignments of the securable object and logically OR'ing together their indirectly related base permissions. Only if the resulting set includes EditListItem is the user allowed to edit the list item.